So, yeah. I completely zonked and missed the lunar eclipse last night. Although, I’m not too broken up about it. I caught one in 2007 at Burning Man which, in all actuality, is much more impressive than watching one from the intersection of 8th and I-5 in downtown Seattle. Concurrently, it happened to be the same time the nutjob decided to set fire to the Man early causing all kinds of ruckus (at Burning Man, not last night). I suppose we were all distracted by the stellar event.

I’m having a battle with unknown persons in my apartment building. I’m getting to the point where I’m considering writing my memoirs of all the goings-on in my building. Aside from the cracked-out chick and the infamous bloody-doorknob break-in, and the vagrants that populate my front porch on food bank days, I feel as if I should get a hazard discount on my rent. As a bonus, there is a halfway house next door, whose residents somehow have a telepathic connection to my mini blinds, know when I’ve dared to open them, thus opening their own and blatantly staring in my windows. I’ve designed a pleasantly written sign that reads “piss off” which I adhere to the windows in such circumstances. 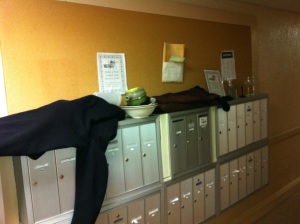 The most recent series of events involves a John Denver’s Greatest Hits album, a Neti pot, several pieces of clothing, dishes, “Class of 1993” champagne glasses, and a bright green file cabinet. Somehow, the mailboxes (which happen to occupy the wall just outside my door) have become the urban residential version of the “free” section of Craigslist. Granted, I *did* place a basket of unwanted DVD’s which disappeared within 30 minutes, but there seem to be new residents who, instead of depositing items at Goodwill or in some circumstances, the dumpster outside, have taken to disposing of unwanted items not only atop aforementioned mailboxes, but also on the floor surrounding them, sometimes even blocking my door. In a fit of frustration, I placed a sign on the corkboard above reading, “Two words for you, people: Good Will. Really.” (Yes, I know Goodwill is one word…it’s been segmented for emphasis.) The sign had disappeared by the following morning and as if in a fit of vengeance, the number of rejected items increased twofold. The toddler in me got good and pissed.

In my own act of juvenile vengeance, I decided that since my apartment hallway had become a prime location for people’s unwanted shit, I was going to take it all the way. No foolin’ around man. 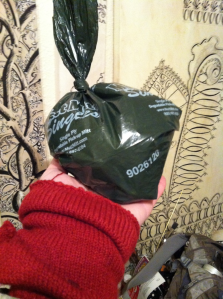 I took one of Doppler’s dog shit bags, which, luckily, happen to be labeled as such, complete with a cute cartoonish pooch on the front. As I lived in the vicinity I wasn’t going to permeate the locale with the scent of canine feces, but I still wanted a bit of realism. I had some pathetic–looking figs in the refrigerator, daintily plopped them in the bag, and proceeded to stealthily add them to the pile, specifically upon the bright green, two-drawer file cabinet.
Some hours later, when I took Doppler out so he could generate the real deal, the file cabinet had been claimed, the small green doggie bag lying on the floor. It had been removed by the next morning.

Then things got really irksome.

Suddenly there appeared a large kitchen bag full of trash and a paper bag full of PBR beer cans.

I’m SO moving when my lease is up.

I’m convinced the awesome maintenance man who helped me with my bathroom flooding debacle has been disposing of all the nonsense. I do hope he is informing management so they can distribute ineffective notices on everyone’s door.

In the meantime, the hallway is clear save for a ceramic pair of cowboy boots, with a large piece broken from them. The piece is included.